One peaceful morning, in the small town of Talon Pikit, an eye-witness to a murder breaks the silent sunlight. Their newly elected Town Mayor, Magtanggol Liberacion, is found in the dumpster, cold and dead with a bamboo pole protruding through (his/her/its) neck. The people of Talon Pikit, after receiving this horrible news, mourn for their slain leader and promise his/her/its grave that they will not stop until justice is served. It is worthy to note, that Magtanggol Liberacion, though wondrously loved by his/her/its people, is a PIG. Why and how Magtanggol became the Town Mayor for so short a time will soon be realized when the local COMELEC Official visits Talon Pikit to investigate the matter. First on their list of suspects is none other than former Town Mayor Vangie Palaban – a ruthless, unsympathetic, corrupt politician during her time. Today, ex-Mayor Palaban and the late-Magtanggol Liberacion will measure each other’s worth for the most coveted mayoral seat. 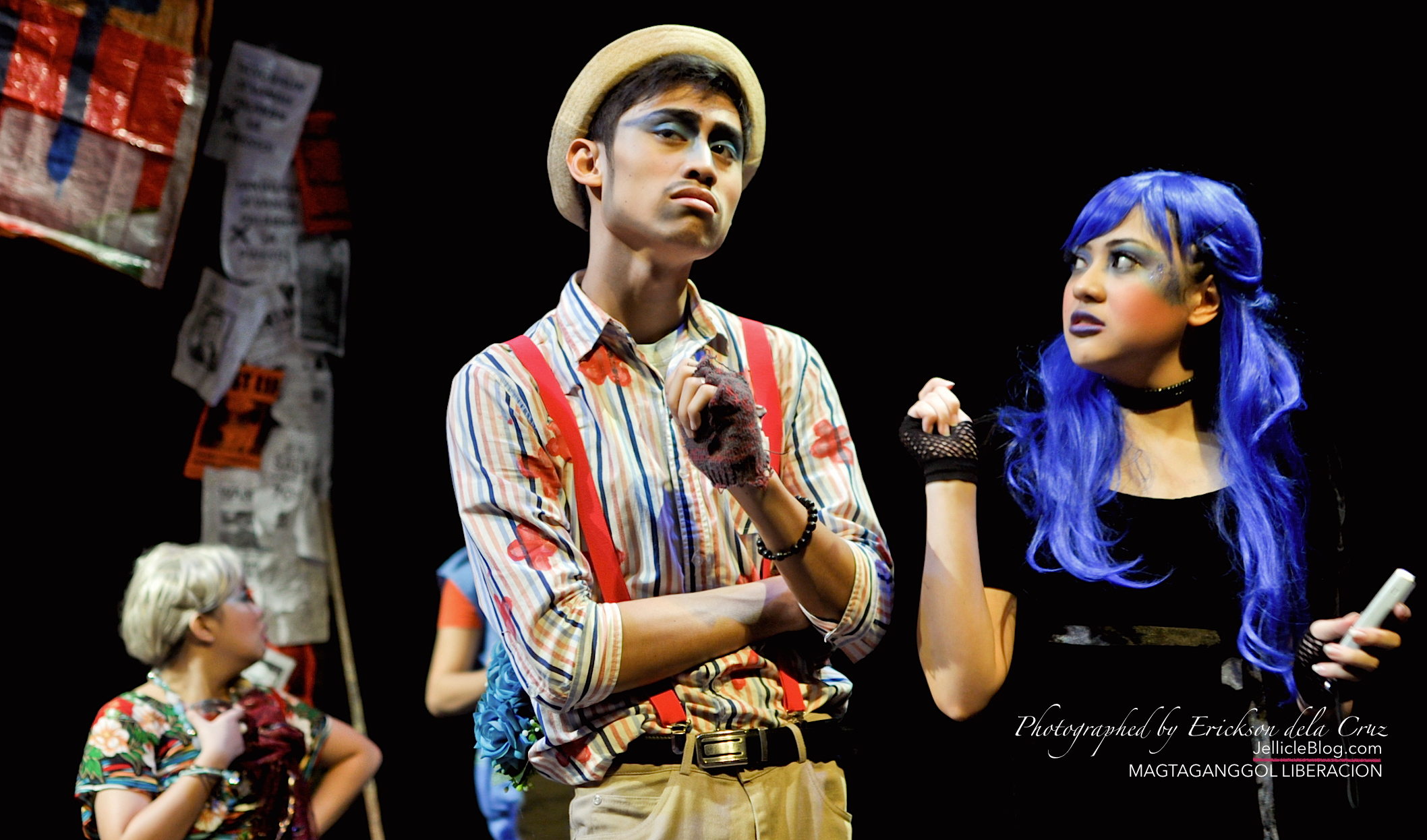 Written by award-winning playwright and screenwriter Rody Vera, and directed by actor-director-educator Raffy Tejada for the DLSU Harlequin Theater Guild, Liberacion Magtanggol is yet another satirical attack on Philippine politics. Tejada re-interprets our familiar scenes through an array of pathetic travesty, satirically mirroring our perceived illusions and blinded decisions. In the world of the seemingly-jolly Carnival town of Talon Pikit, Vera and Tejada, present these ironies where theatricalism, foolery, mockery and corruption become our accepted truths. When the townspeople elect a Pig over an known Trapo (traditional politician), one can’t help not to be suprised; but in a country governed by ruthless “buwayas,” one can’t help not to empathize and hope.

The late mayor Magtanggol Liberacion, in its “pig-ness” presents a more truthful, sincere and genuine existence than the rest of Talon Pikit. It is the only “real” thing, the remaining hope in our pursuit for a better life. Though pathetic and tragically laughable, it delivers a message so clear, so striking, and so personal.

The DLSU Harlequin Theater Guild ensemble who portrays the different characters in Talon Pikit farcically represent each of us: the people writing on ballots and allowing those elected to continue on with their corruptive business thereafter. It is worthy to note, how these young actors bravely immerse themselves in a material that depicts characters that are beyond their years. These college students portray their mothers, fathers, relatives and neighbours, hoping that though they themselves still don’t have the chance to elect, call to the ready and pray they they do better – not just with their ballots and pens – but also with their commitment to vigilance.

Mae Paner (aka Juana Change) as the ex-Mayor Vangie Palaban is such a treat on stage. Her presence fills the Huseng Batute with riotous laughter and cynical cheers from the audience. As the corrupt, self-absorbed and cunning trapo, Paner, wickedly brings to the stage, yet another character that we will laugh at and, yet, rally against. I salute Mae for her bravery to stand on issues by courageously personifing those whom she hate and oppose, and bring them under the stage lights to a listening audience. If this is not cheerful cynicism, I don’t know what is!

What makes Magtanggol Liberacion a notch higher from its predecessors of our contemporary political satires, is that it aims to teach a new mindset for the Filipino voter. It questions one Filipino value – utang-na-loob (gratitude) – which is now being used by politicians for a vote. How could we not root for the mayor who, despite his corruption and fake sympathies, once gave me cake on my birthday? a schoolbag? a scholarship? #TangInaThis. Vera’s material examines a common scenario we are all so familiar with and critically presents a tragedy we willingly impose on ourselves. It argues that our right to suffrage demands a responsibility beyond the inked ballot. Voting wisely may be the first step, but it doesn’t stop there. Voting wisely will not challenge the System nor change our lives. Finally, it makes us examine how we, as a people, have the responsibility over our lives, and that we can continually make things better through vigilance, watchfulness and love for country.

In our own Talon Pikits of unfinished overpasses, unroofed schools and undrained floods, Magtanggol Liberacion tells us that progressive involvement continues even beyond Election Day, and if we could only  continue with our vigilance and personal activism, can we start to give our lives a fair chance to fight for its own liberation! 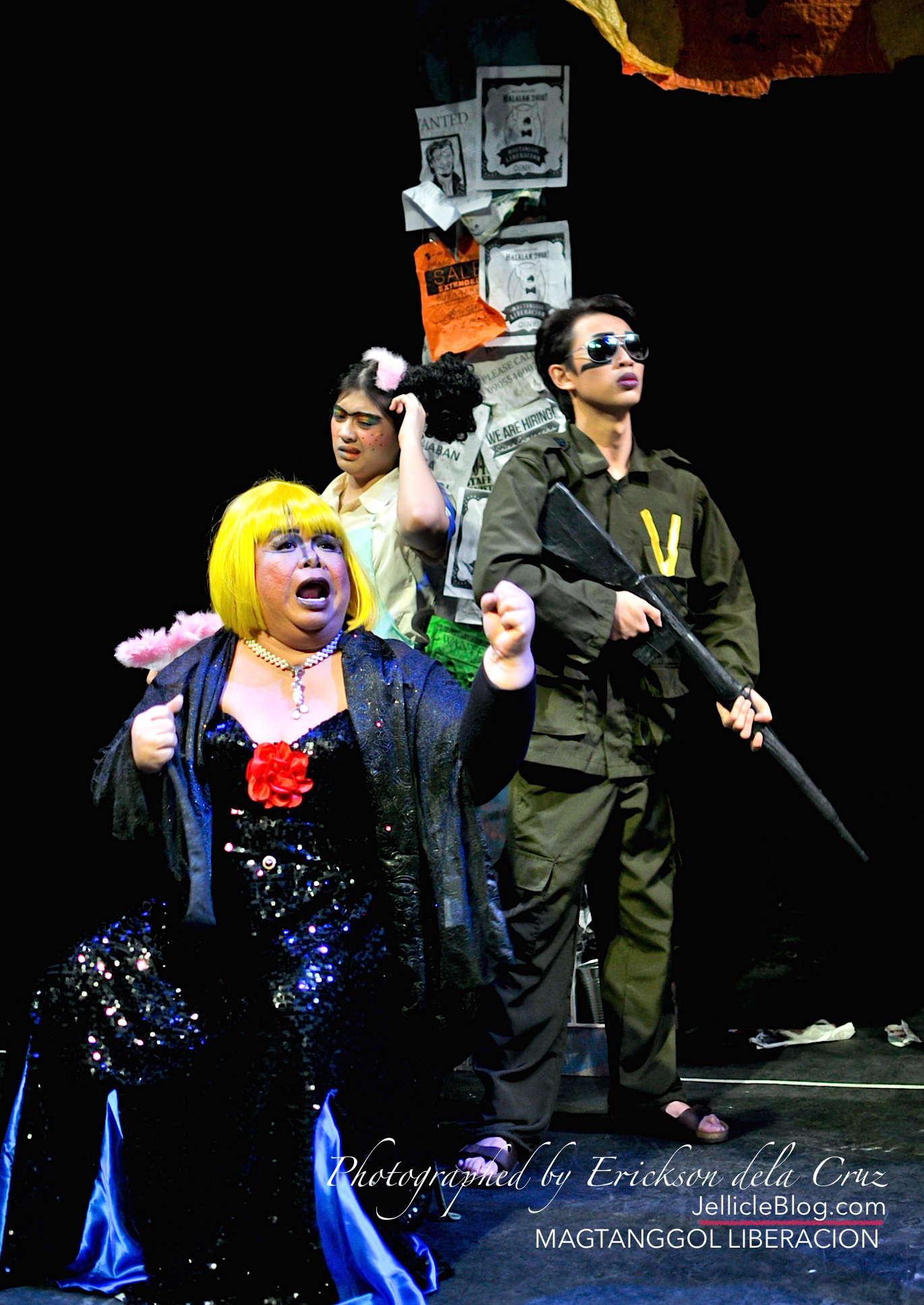 Magtanggol Liberacion is having its limited run at the CCP Huseng Batute this weekend and will have shows later today, July 19, Sunday at 3pm and 8pm. For ticket inquiries please call the CCP Box Office at 8321125 or you may contact Geordina Carla S. Uy at 0917 546401.

The JellicleBlog, in support of this production will have a podcast on Magtanggol Liberacion this week. Stay tuned, jellicle readers. And listeners.

SINGIN’ IN THE RAIN’s “Glorious Feeling” comes to Manila!