As a season offering to all schools, parents and children, Kids Acts Philippines proudly presents BEAUTY AND THE BEAST with script and lyrics by LUIGI NACARIO and music by EUGENE BELBIS, as adapted from the original book by Jeanne-Marie LePrince De Beaumont.

Beauty and the Beast is a tale of friendship and true love of a beautiful girl and a horrible beast. Their love story started when Beauty’s father gathered a rose in the beast’s garden who dearly treasured and value it beyond anything in the universe. The Beast furiously attempted to kill Beauty’s father. He begged for his life, and he told Beast that he gathered it for one of his daughters who desired him to bring him one. The Beast decided to let him go in a condition that, he will let her daughter come to the palace willingly and stay with him as he desired. But if she refused to the idea, the merchant will go back to the palace to pay for his ungratefulness. Beauty willingly, went to Beast’s palace to save her father’s life until one time Beast asked her to be his wife but she offered friendship instead of marrying him. Beast’s persistence softened her heart and discovered that the monster had a pure heart. 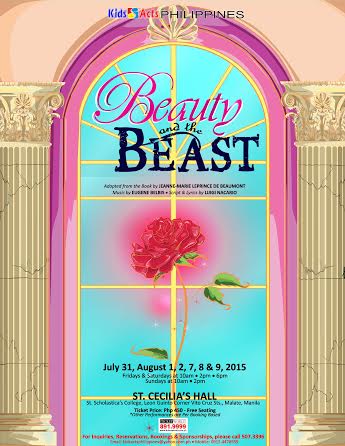 NEWS: The Virgin LabFest 2020 KAPIT is EXTENDED this July