In his book, Something Like an Autobiography, Akira Kurosawa narrates that during the filming of RASHOMON (1950), his three assistant directors came to see him. They approached him, puzzled and unhappy. They said they didn’t understand the story. Kurosawa, in his most subtle of ways, replied, “if you read it diligently, you should be able to understand it, because it was written with the intention of being comprehensible.” The three assistant directors didn’t leave. They insisted that the screenplay was vague. Incomprehensible, even. “We believe we have read it carefully, and we still don’t understand it at all,” they argued. And so Kurosawa explained it to them. Two of the assistants were satisfied. The third, however, still didn’t. With puzzled wonderment, he scratched his head and followed the other two who just left. 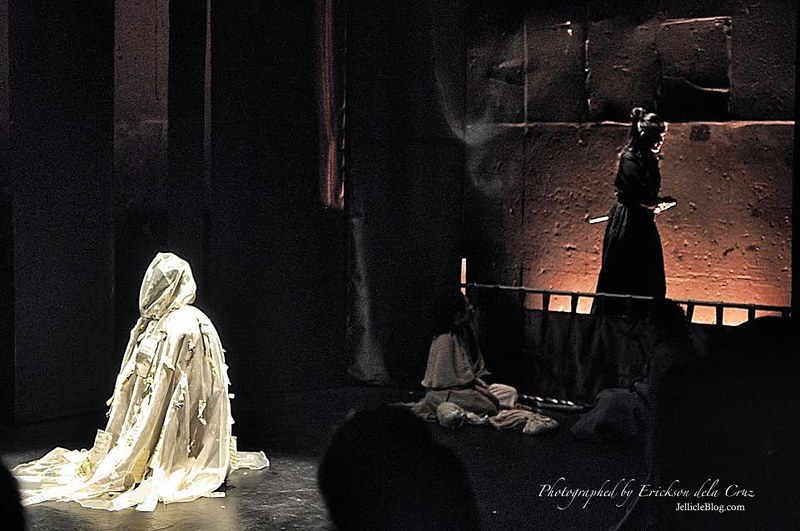 And it is in these complexities do the PHILIPPINE HIGH SCHOOL FOR THE ARTS (PHSA) and DULAANG SIPAT LAWIN (DSL) take yet another challenge to bring back to the stage Guelan Valera-Luarca‘s Filipino adaptation of RASHOMON at the CCP. As part of their yearly grand recitals, PHSA and DSL feature graduating theater majors to retell the timeless original short stories by Ryonosuke Akutagawa (RASHOMON and IN A GROVE). And through its careful direction, this production presents a traditional, yet brave reminding that truth is relative, and honor — self-serving. 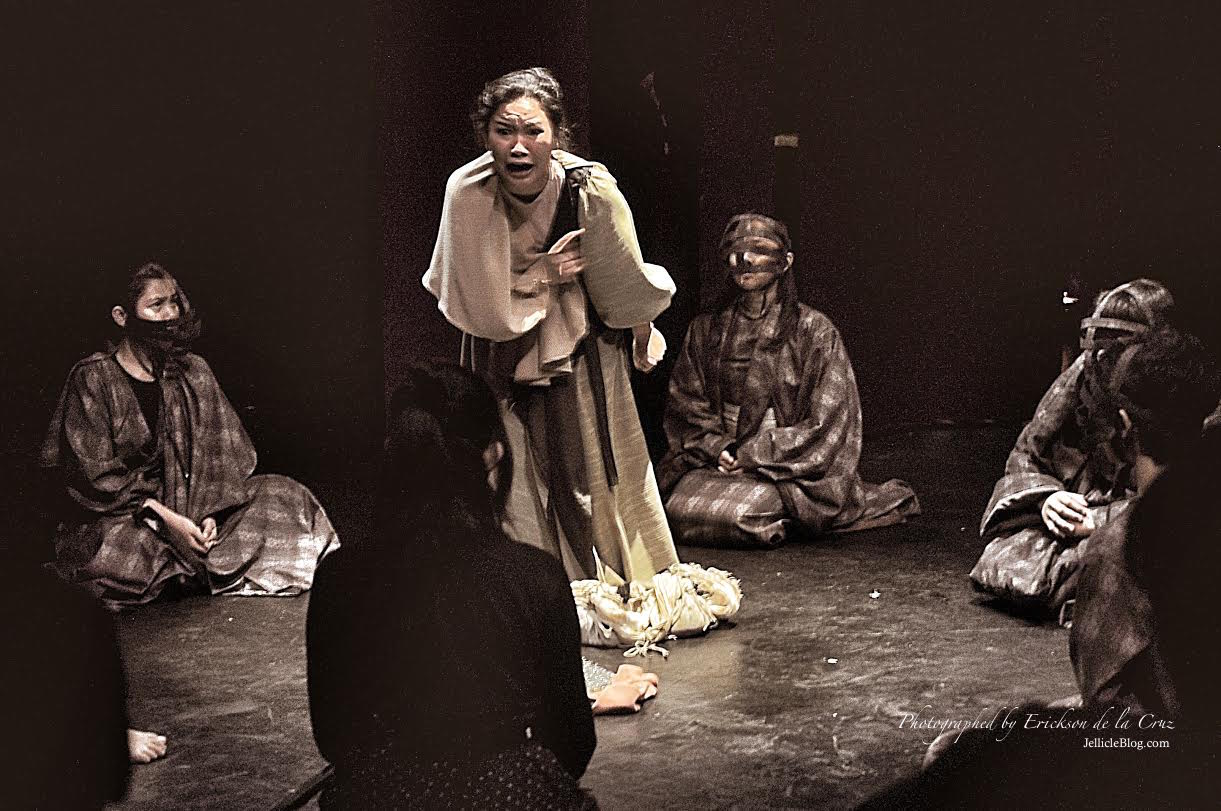 A torrential rain brings a monk, a woodcutter and a wigmaker to take shelter under the covers of Rashomon (a city gate in Kyoto). They start a conversation and eventually take interest in a recent murder case, which involves a Samurai, his wife and Tojamaru (an infamous Bandit in Kyoto). FACT: The samurai died, during the encounter. In the courts, they say, came three testimonies, all of which do not match. Three events. Three testimonies described by all three participants in three different ways — and all three claim to be the killer. To make matters even more complicated, the woodcutter himself, has his own eyewitness account of the event.

Sipat Lawin Ensemble’s Artistic Director Jk Aninoche commands this adaptation with considerable respect to its original form. He choreographs his blocks with squared Japanese grace, reminiscent of Noh traditions. Aninoche attacks Akutagawa’s intricate plot on deceit in a minimal, yet dimensional set (by Ed Lacson Jr.) that creates a bendable atmosphere — as supple as the truths that unfold. Though Rashomon thrives in its storytelling, Aninoche manages to establish audience rapport through focused narrations, guided transitions and well-sustained renderings. 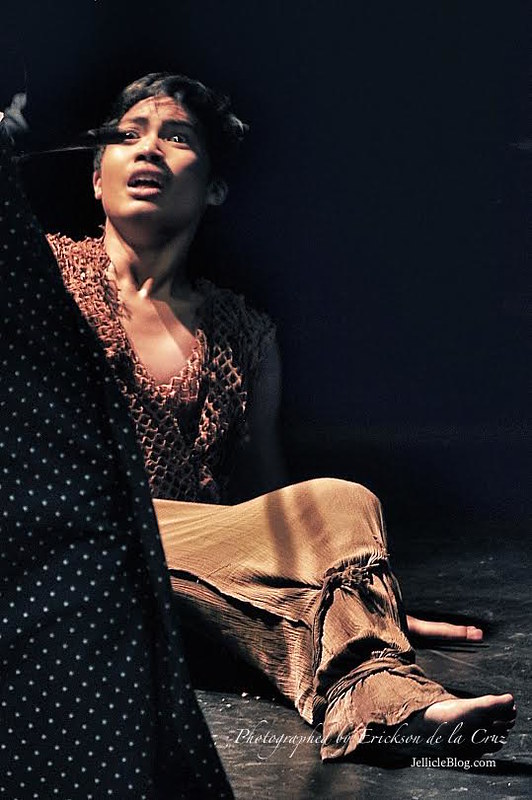 Jerom Andrei Canlas plays the Monk and Tojamaru gracefully, but it is with the latter that he executes with extreme familiarity. As the Monk, Canlas is raspy, old and escaping. When he is Tojamaru, he is the great bandit whose vulgar strength and immeasurable lust present a villain most convenient. He is central in his sexuality and, ruling even across the social classes. On stage, Canlas is considerably worth your sight, a young artist unknowingly delivering a performance that is to be remembered for a time.

Alyssa Mae Herrera as the Woodcutter and the Medium amazes with her unconscious wit and delicate flexibility. As the Woodcutter, she delivers a young doubting man whose mischief drags his own conscience downhill. When she questions her own character’s morality towards the end of the play, one can’t help not to empathize with her. Herrera is best in her
silences, but great in her manifestations. Her booming voice and calculated expressions, as she plays the Medium, conquer a great many gasps in the CCP crowd. She is the evil incarnate whose truth defies her own. In her deliriums, Herrera proves herself far better than Rachel Alejandro as the Witch in UpStart Production‘s INTO THE WOODS — a comparison that is quite inappropriate, yet compellingly necessary. There, I said it, na. 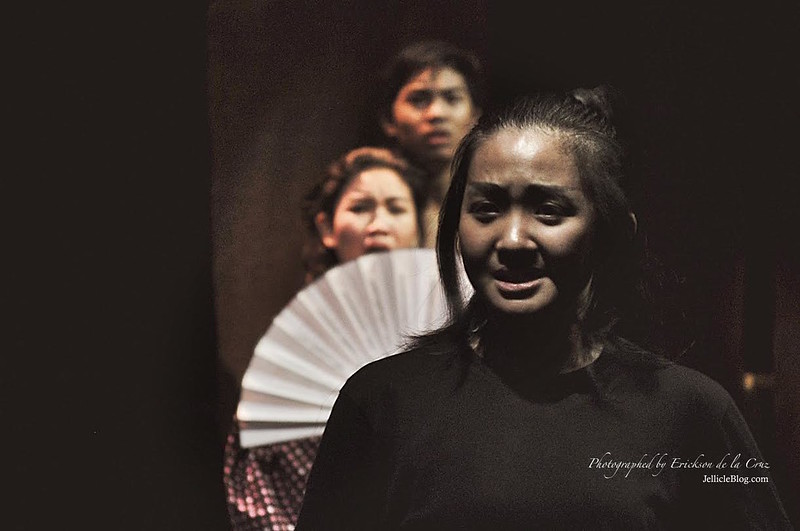 One can argue how April Jasmin Rosales reinterprets the Samurai. It is arguably a challenge for a young woman such as Rosales to interpret a male cultural symbol, much more a warrior whose historical relevance has created a cultural identity on its own. But she delivers most fairly. Her portrayal of a helpless warrior and an embittered husband set the underlying tone of spousal regret and loss of honour. On the other hand, as the Clerk of Court, Rosales is snappy and neurotically tensed. She represents an uncertain law in a society of varying truths and diverse realities. 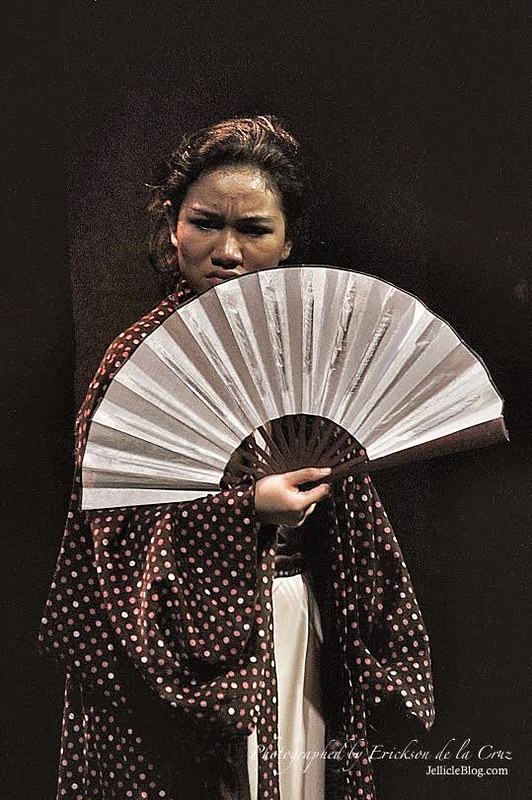 Much can be said about Jewel Tomolin who plays the Wife, and the Wigmaker. Tomolin transitions elegantly from an unrestrained commoner to a regal spouse. In her most decreased, she offers a fairly unconventional attack to the Wigmaker; unruly and illogical. But when she is the Samurai’s other half, she playfully switches from the cultivated city wife to the lusty countryside slut. Tomolin’s presence establishes the feminine symbol that is essential to each version’s narrative. And can I just say, that she manages this centrality most efficiently.

Rashomon comes with an eccentric narrative, and it is from this unconventionality that it draws its timeless power. Its very title has entered the English language, because, like Catch-22, it expresses something for which there is no better substitute (Jones, 2004). Unlike the familiar use of flashbacks in other literary works to establish a true past, Rashomon was the first to use flashbacks that disagreed about the action being flashed back to. Nowadays, we have films like COURAGE UNDER FIRE (1996) and THE USUAL SUSPECTS (1995), but it is from Akutagawa’s intricate analysis of varying truths that he has established a philosophy worthy of a discussion. His plot presents memories that are both true and false. True, because they present an unambiguous recollection of what each character thinks to have occurred. False, because as Kurosawa explains in his autobigraphy, “Human beings are unable to be honest with themselves about themselves. They cannot talk about themselves without embellishing [their own].” 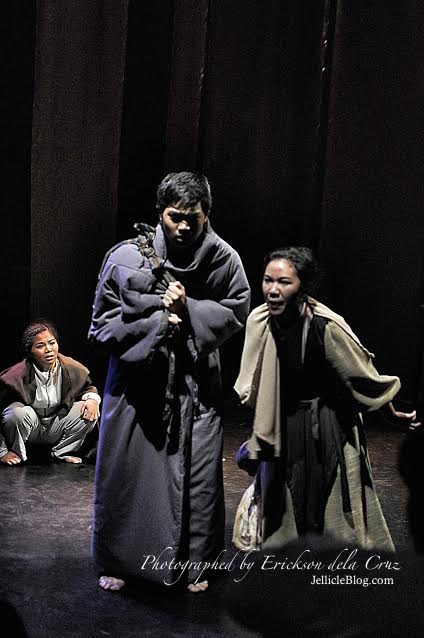 Going back to the assistant director, who did not understand Akira’s explanation of the plot, it is understandable, now, how such a “comprehensible” story could still be so vague. Maybe that was why Kurosawa, in his 1950 screen adaptation, opens the the film with the Woodcutter whispering, “I do not understand.” But now, we know why. Because while RASHOMON’s plot gives a detailed explanation of things that have unfolded, there is never a solution. That in our world of conflicting truths, we have miserably embraced a life of flexible realities and inexistent solutions.

If these are not the tragedies of our truths, I don’t know what is.

AN AFTERTHOUGHT
Canlas, Herrera, Rosales and Tomolin are graduating high school students from the Philippine High School for the Arts. Watching them on stage is a continuing wonder how the young can be great, even in their assumed innocences. It was far from perfect, yes, but as always, there is beauty in young art. Its magic lies in its freshness and its hope in its promise. Their dare to stage RASHOMON is, for me, a brave attempt to be great, knowing and exceptional.

Having said that, I’m looking forward to my next experience. And though this was my first time to see a PHSA grand recital, I know (for sure) that I’ll be supporting these artistic pursuits, moving forward.

NEWS: FEU’s President’s Committee on Culture Presents The Feu Bamboo Band in “A Toast To Broadway” on May 4