The Pointe of Ballet

Ballet Manila’s press preview of BM 2.0, some two weeks ago, was a tough act to follow. Immediately after my first BM experience, I can’t wait to type-in my thoughts and share how a 30-minute preview can stay with you for the rest of the week. It wasn’t just a sneak peek. It was a revue. It was show-stopping, tireless, and unquestionably promising. The next two weeks made me wonder what kind of anniversary concert BM has in store for the actual run. As what I’ve said, it was too tough an act to beat.

But BM 2.0‘s opening night delivers performances that went beyond my disturbed expectations. Ballet Manila, in celebration of their 20th anniversary, offers the best of what the company (or the country, for that matter) can offer. I never thought that ballet, in its most traditional and experimental of forms, can be wild, spell-binding, unpredictable and wonderfully exhilarating!!! (yes, I’m shouting here) 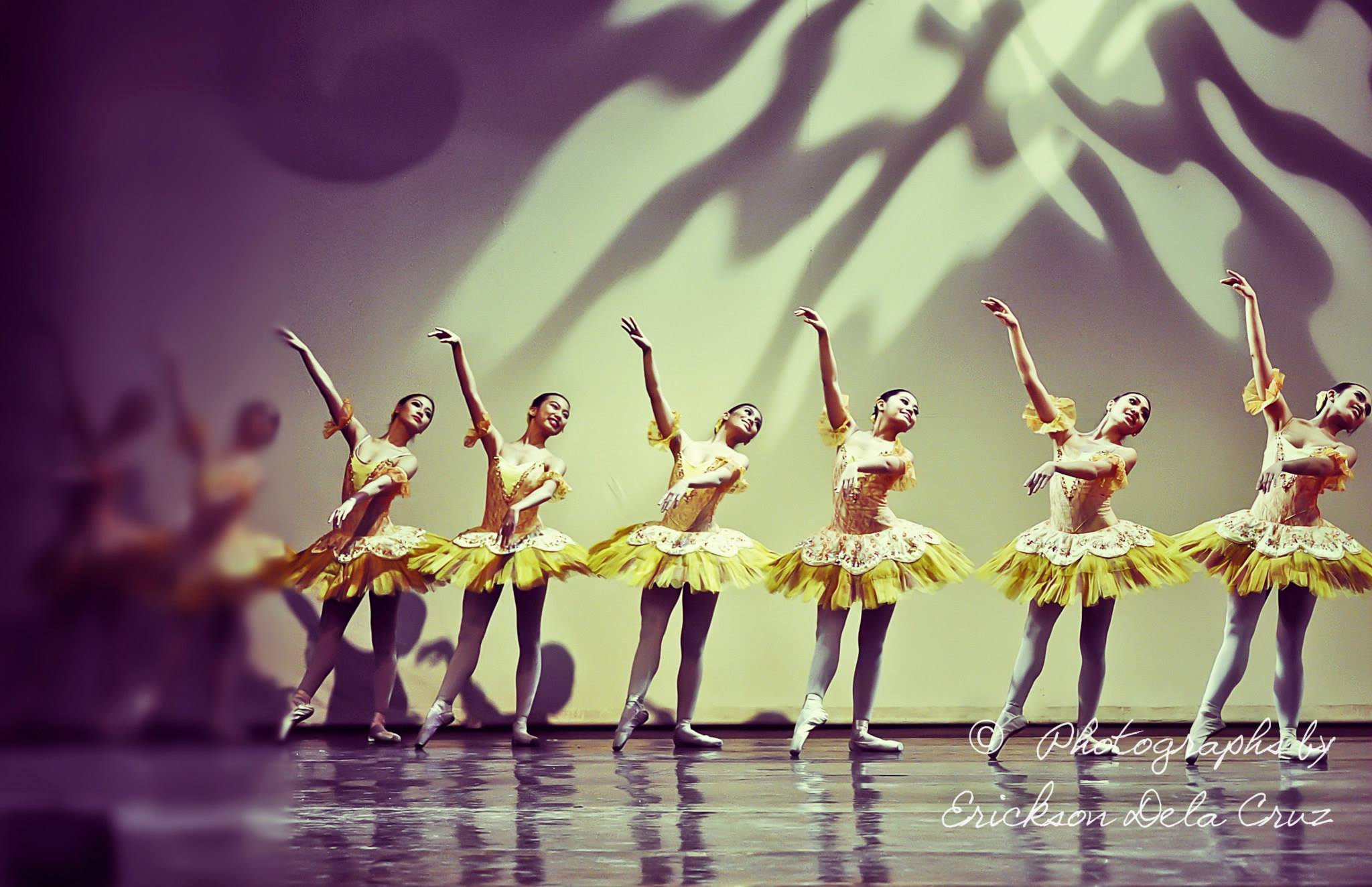 The concert raises its curtains to a classical divertissement of the full length ballet PAQUITA. Marius Petipa‘s choreography embraces the conservative, yet celebratory, approach to ballet’s discipline. In its seamlessness, Paquita showcases how ballet, as an art form and a discipline, can amaze the uninitiated through its enchanted unison.

Christine Rocas and Rory Hohenstein of the Jeoffrey Ballet in Chicago’s graces the show with the BALCONY SCENE FROM ROMEO AND JULIET. Rocas and Hohenstein gracefully personify those timeless characters that have always been so close to our hearts. Of course, there are no Shakespearean lines, but Kryzysztof Pastor‘s choreography and Sergei Prokofiev‘s music are enough to deliver the same spell of a unique Shakespeare experience. Rocas, an alumni of Ballet Manila, returns to the Aliw stage with exceeding grace and character. Hohenstein, her regular partner, dances and plays Romeo with dashing precision and unflagging elegance. Their next piece, AFTER THE RAIN, is a sensual duet that measures control in its most unconventional. Rocas and Hohestein tirelessly crack the stage with Christopher Wheeldon‘s elegant and wonderfully rousing choreography. It is lyrical, yet dynamic; dramatically breakable yet undeniably cohesive. 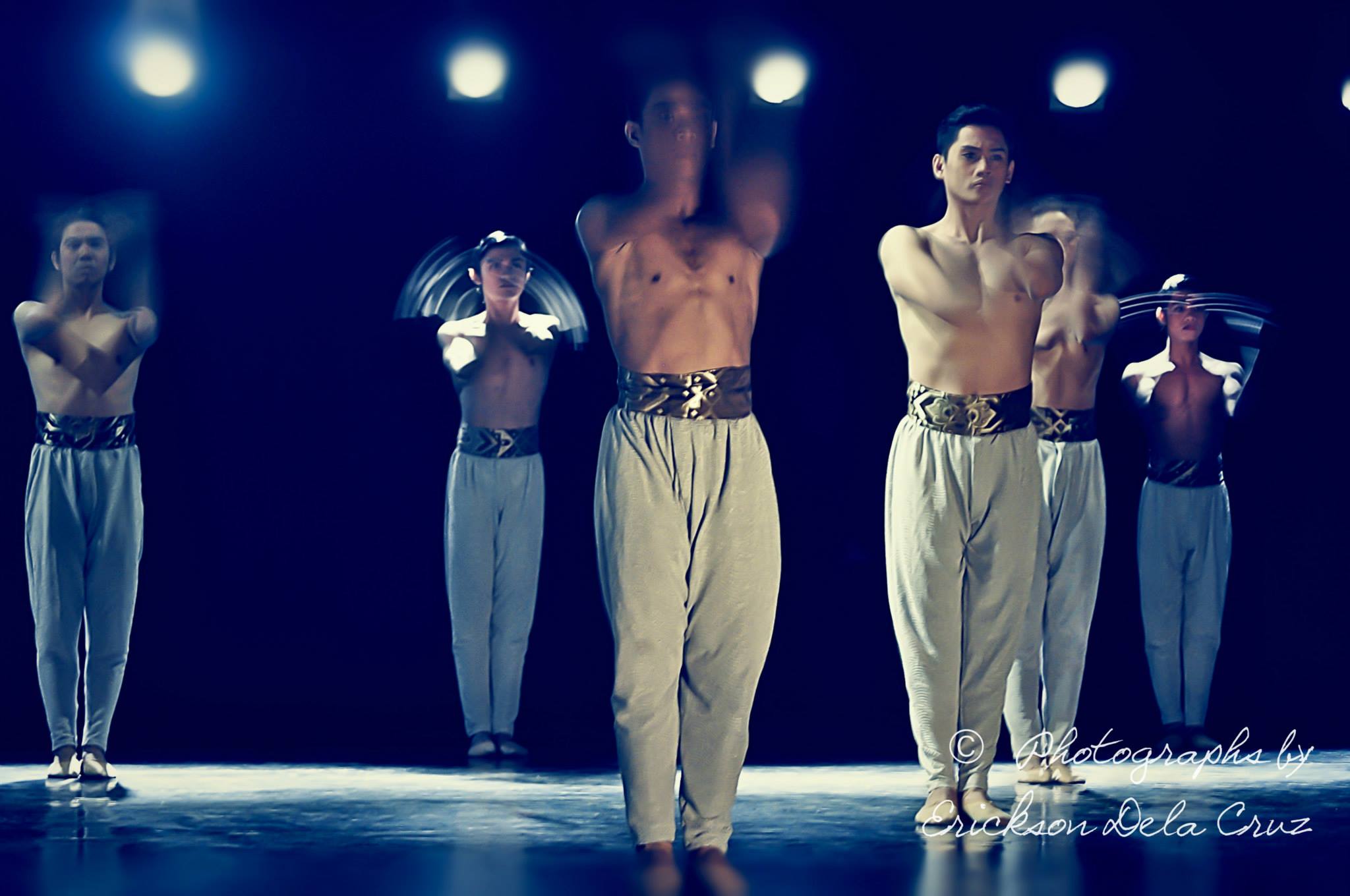 As promised, Annabelle Lopez Ochoa‘s World Premiere of BLOOM lives up to the expectation. Based on the ritual of Puja in Bali, where Balinese put flowers on doorsteps every day to manifest appreciation and chase bad omens from their homes, this piece explores the magic of ceremonial devotion. Mark Sumaylo and Dawna Reign Mangahas perform the amazing duet with incredible vigour. Ballet Manila’s male dancers execute Ochoa’s imagination with amazing exactness and unity. In Bloom, we see no faces, but forms. It is a piece represented by men of strict, squared and powerful rites, and by women of beauty, grace and favour.

Though from a ballet neophyte’s perspective, I saw Bloom as a familiar story of a coming-of-age. For me, Ochoa achieves a brilliant interpretation of a man’s journey through sensual passions, and inevitable pains. Bloom fills the stage with overflowing testosterones (not common in Philippine ballet) and blows the audiences with a sudden punch of passionate intensity.

Despite the misinterpretation, there’s still beauty in the accident. Art ‘blooms’ in its diverse readings, and its beauty grows as readers and audiences take home a great many folds of interpretations.

Gerardo Francisco‘s TARA LET’S brings back a familiar thrill that is so close to home. Ballet Manila, has once again proven its dedication to bring ballet to the people.  Tara Let’s, in its familiarity, makes it a marching salute to the Filipino talent which makes it oh-so personal! 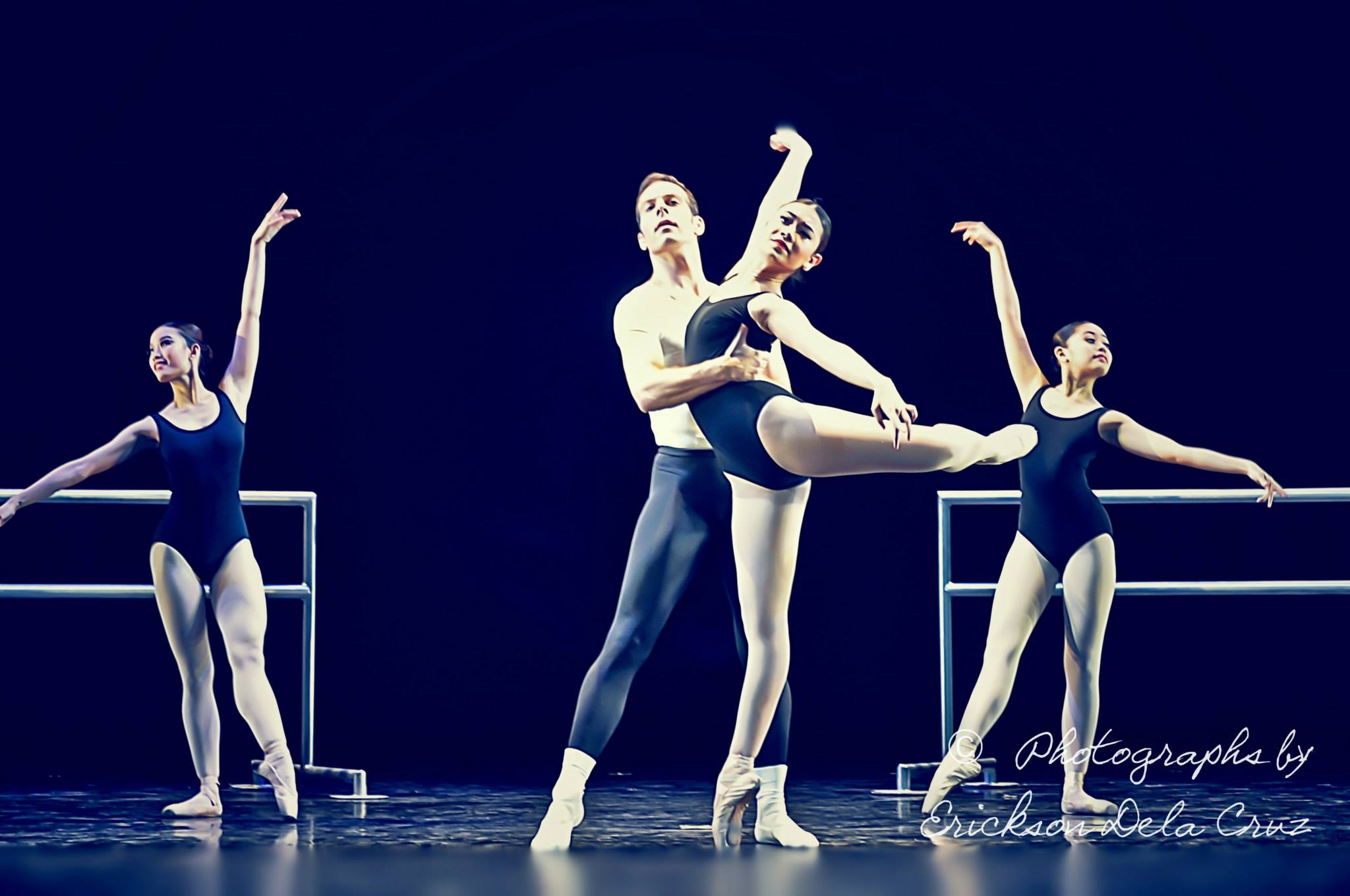 Osias Barroso‘s ECOLE (French word for ‘school’) is a fitting finale that caps BM 2.0. Originally staged in 1999, Ecole brushes up the entire concert with a grand celebration of the enchantment that is Ballet. Featuring the entire BM ensemble, this reprise renders an outstanding tribute to the dedication and passion of dancers to perfect a discipline so rigid, so jealous and so demanding. Barroso’s design and concept for Ecole may pass off as simple and routinely colorless, but with  synchronised grace and outstanding control, Barroso has once again proven that ballet, as an art form, can be glorious even in its simplest of forms.

Worthy to mention is  Alvin Santos who was part of the original 1999 staging of Ecole. After being part of the original run, Alvin further honed his craft and became the first male Filipino Danseur who became a finalist in an international ballet competition in Japan in 2003. Now, 30-year-old Alvin returns to give tribute to Ecole and delivers amazing grand battements that are worth the cheer. 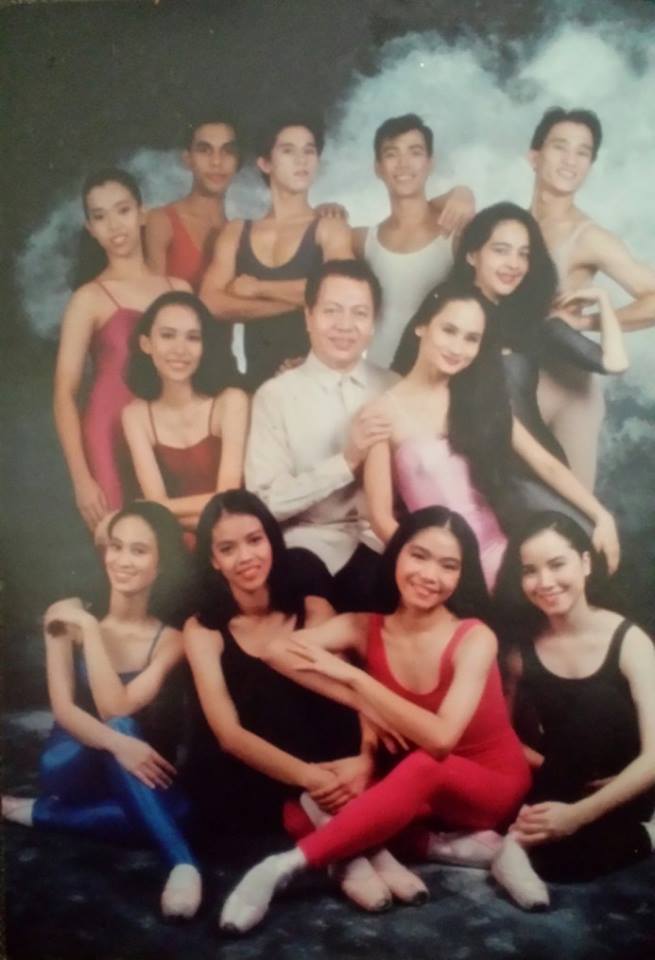 BM 2.0 is a festival for the 20 years of passion, pain and perseverance of its original founding members.  From its humble beginnings to a glorious couple of decades, Ballet Manila packs its anniversary feast of talents with great performances and memorable ballet experiences for its audiences. Prima Ballerina Lisa Macuja-Elizalde‘s 20-year journey was all worth it. She did not just give birth to a ballet company. She gave birth to artists!

To transform, to teach, to thrill — those, I think are the pointes of ballet!

As the curtain rises for the final call, BM 2.0’s 10-minute standing ovation is a praise and reward much deserved.

FIVE STARS OUT OF FIVE!!! 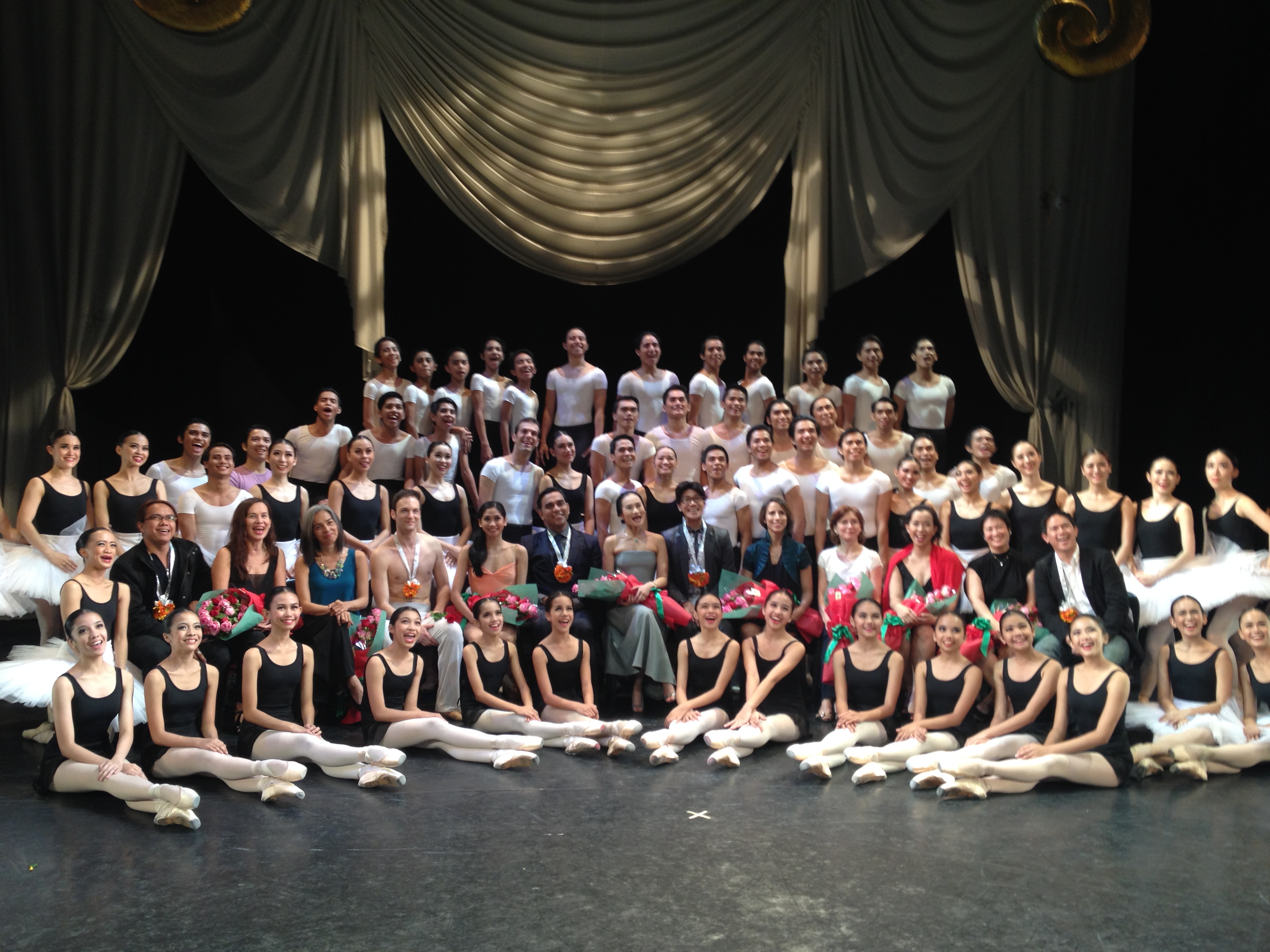 P.S. BM 2.0 closes today at 3pm. Catch it and understand how dance can be a world on its own!