It all started with an award-winning documentary. Who would have thought that Taylor Heymann’s 2005 video documentation of five Pinoy Caregivers in Israel will make it to the PETA stage six years after?

Well, Palanca Award-Winner Liza Magtoto (Despedida de Soltera, Agnoia and Rated: PG) and multi-award winner Vincent de Jesus (Himala the Musical, Zsazsa Zaturnnah ze Muzikal, and Manay Po), thought about this some years ago and went to a marriage of thoughts to bring to the Filipino audience an Israeli documentary that was once banned here in the Philippines.

The story revolves around five Pinoy gay Caregivers in Israel. Shai (Vince de Jesus) has been working non-stop as a caregiver and sometimes a masseur just so he could send money back to the Philippines. Despite the physical distance, his mother’s voice consistently reminds him of his responsibilities, insecurities and immorality. Likewise, Kayla (Ricci Chan/Jerald Napoles) has also been working non-stop, but hadn’t had chanced the luck to find the perfect employer. Despite his education he has accepted other domestic tasks apart from caregiving just to augment his need for a job and temporary security from deportation. Chelsea (Melvin Lee), on the other hand, has it all. A stable job, a lovable employer and a dashing boyfriend. His elderly is kind, giving and understanding. Despite the subtle mocking Chelsea would receive from his ward every once in a while,  he was his symbol for an absent father. Thalia (Jason Barcial/Dudz Terana) and Jonee (Buddy Caramat/Phil Noble) are also part of the group. One a flirt, and the other a pessimist. Together, they formed a group that performs nightly in small time joints, until they got a possible break to perform in a more exclusive bar – The Tel ‘a Viv.  Will they continue on doing what they do, or will their personal challenges hinder their search for identity and ambitions? 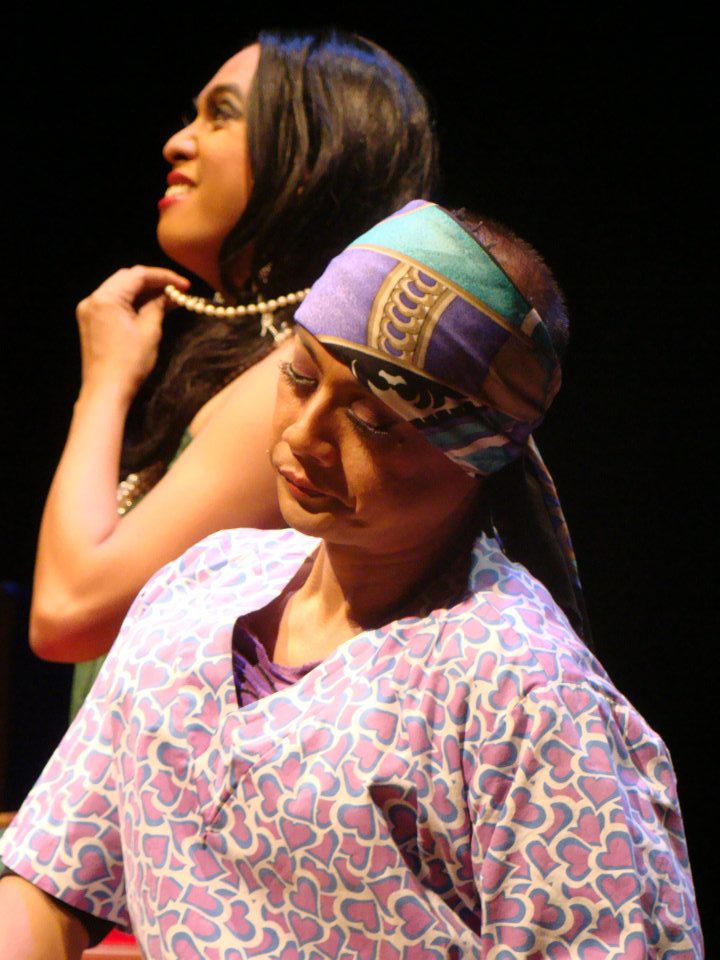 Apologies: this was my first PETA play (evah). But oh! it was a treat! The entire ensemble projected the needed energy to complete and stage a comedy musical. Melvin Lee (Sayaw Sabel, Skin Deep) as Chelsea was jumpy, indefatigable, and delightful. His portrayal of a symbol for optimism in a strange culture is enough to keep your hopes high. Vince de Jesus as Shai was a performance to treasure. He doesn’t act. He lives. He engages the audiences through natural movements and expressionless, yet effective humor. Award-winning stage actor and singer Ricci Chan (Zsazsa Zaturnnah ze Muzical, Rent, Temptation Island) as Kayla was still as superb as his other theatrical performances. Indeed, one can set high expectations from him when you see his name and photo in a souvenir before a show. His subtle nuances, and automatic wit were so powerful, you’d laugh out loud without you knowing it. On the other hand, Jerald Napoles‘ Kayla (Chan’s alternate) was near perfection! Despite the fact that he was the only straight actor in the entire main cast, his portrayal of a gay underdog was enough to make me laugh at the start, and cry at the

end of Act of 1. He may not have Chan’s voice, but he surely has the talent to add dimension to a relatively complex character. Dudz Terana (Si Juan Tamad Ang Diyablo at and Limang Milyong Boto) as Thalia was hilarious, sexual and a scream. His minor projections for a snicker were subtle, yet can still command a crowd to laugh hysterically.  Buddy Caramat (Noli at Fili Dos Mil, Ikaw ang Pag-ibig) deliciously created the Jonee character. His juicy portrayal of pessimism was ambitious, however, falls short in terms of the needed energy I was expecting. However, Phil Noble (Si Juan Tamad Ang Diyablo at ang Limang Milyong Boto: director) created the same role in some of the performances, and must say that he creatively projected the required negativism in the story. His matured portrayal of a character on a losing end was so  convincing, I even saw myself.

The rest of the ensemble equalled the main actors’ theatrical spirits. Paul Holme convincingly changed characters and projected energies required of a current role. AKAfellas’ Myke Salomon as Daniel/Faraj, was delicious, hot, and convincingly sexual. His singing voice was that of our typical Prince Charming and his  performance was superb, you’d think of Gene Kelly and Simon Bowman at the same time. 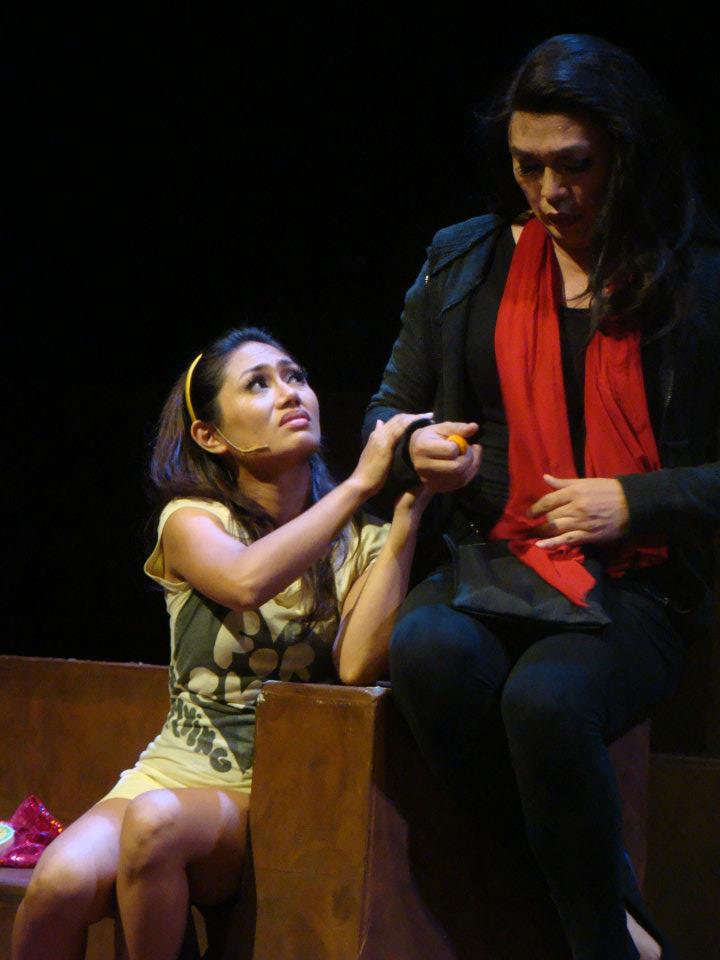 Much can also be said for the Technical Department. Director Maribel Legarda used minimal sets, detailed blocks and technical protocols to deliver clear, watchable scenes. Her interpretation of Magtoto’s script vary accordingly as the stage changes set  for new dimensions, time, wits and depths. Lisa Magtoto’s plot provided a new perspective. Her storyline liberated itself from our typical revolutionary gay fuss. Her attack was somehow ambiguous, yet liberating. Behind her gay characters is an argument far beyond our usual marginal hullaballoos we shout along Remedios in Junes and Decembers. The Filipino worker, his adversities, challenges and woes were communicated clearly – thus the song Oy Vey (Oh my Lord!).

What makes Caredivas a better bet this weekend (it’s already their closing week) are Vince de Jesus’ new tunes. I have admired his talent in Himala the Musical and (of course) in Zsazsa Zaturnnah Ze Muzikal. But the music written for Caredivas were exceptional. The significant Yiddish tunes we hear in Fiddler on the Roof, were but familiar themes in Caredivas. Content-wise, it speaks to the audience a simple yet disturbing truth about our fellow countrymen abroad. His songs of joy, celebration and woe were sufficient to stir the ignorant in us. 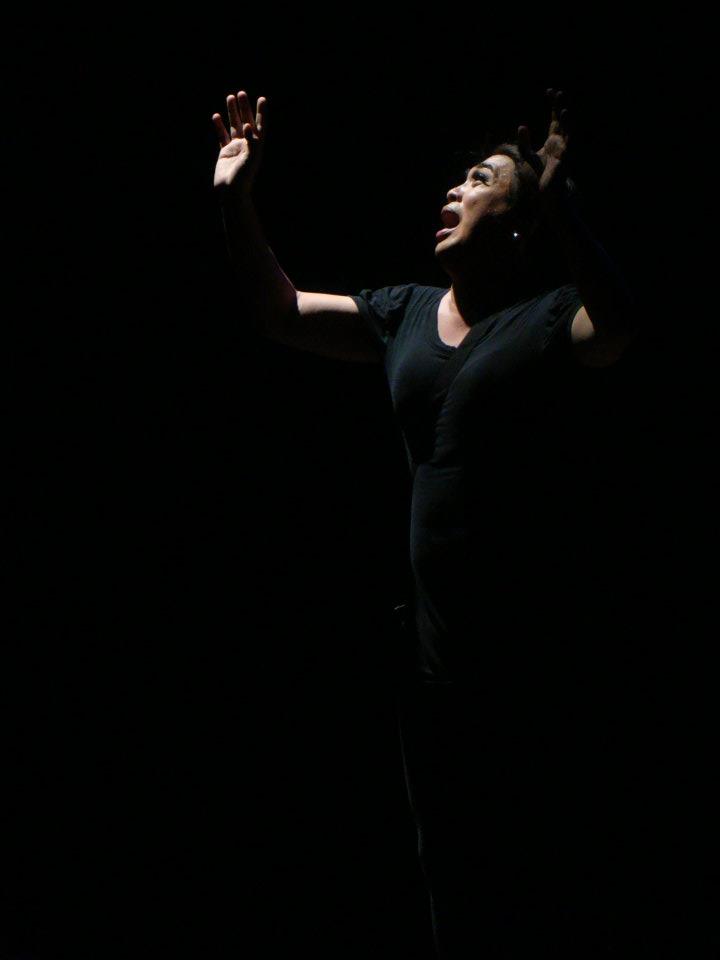 Caredivas is not a story of epic proportions, and doesn’t come with a cast of thousands. There are no Sarah Balabagans here, nor Flor Contemplacions. There may be a hair-raising scene prior to the end of Act 1, but that’s it. In Caredivas, it is the Filipino culture that is being tried and persecuted abroad. The musical extemporizes how despite the worrisome pains, the Filipino still manage to pull that smile, and find ways on how to stay happy – and surviving.

Story-wise it is happy musical with the purpose to make the audience laugh, cry and learn. The characters may be gay, ambitious, flirtatious and queer, but the plot’s undertones deliver a far deeper and bigger outcry – that culture can be damaging to identity, and that lack of tolerance may be another’s misfortune.

Catch Caredivas on its closing weekend this March 12 and 13 at the PETA Theater.