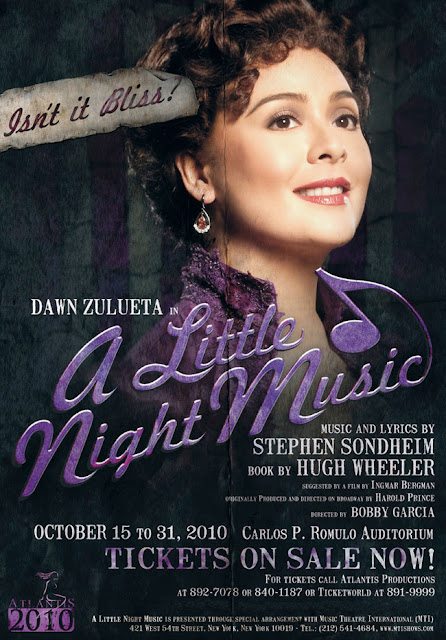 We’ll soon hear Desiree’s lament on lost love and forgotten youth again, this time on the Carlos P. Romulo stage. I’ve seen the Broadway cast revival years ago, and got enthralled, not in the performances, but on the eccentric Sondheim music.

Though this is not your typical Legally Blonde (the Musical) or Little Mermaid (the Musical too), A Little Night Music is still a must see for hard-core Sondheim and Broadway fans alike.

This time, TV and film actress Dawn Zulueta will take on the coveted role of Desiree. I heard that her performances in Singapore were well-recieved.

A little Night Music will premiere on October 15 – 31 in Carlos P. Romulo Auditorium.  For tickets and schedules visit Atlantis Productions‘s website or call 892-7078. Tickets are also available at Ticketworld.

Another gay flick to watch out for